I’ve started playing Star Wars: The Old Republic, Bioware’s hefty stab at capturing the MMO market, and I’m really enjoying it.  It has a rich story that I’ve come to expect from their elite calibre of RPGs, and has me contendly suckling on their upgrade path teet from humble padawan to master jedi. 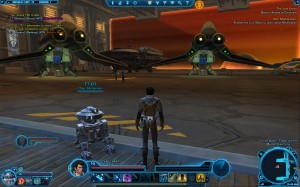 And it’s totally free.  The decision to make the game free-to-play, while still offering a subscription was a bold one, and no doubt has attracted many new players who were curious but feeling too cynical after other disappointing massively multiplayer games.  There is also a one-off purchase system where you can buy ‘Cartel Coins’ to buy in-game items.

I have considered subscribing, but not for any attractive in-game item they’ve offered me, or even to make up for some of the exclusive items available to preferred players, or, for that matter, to avoid the XP drain suffered by free-to-play leeches like myself.  I wouldn’t give them money for any of the reasons they’ve attempted to coerce me.

I’d give them money because I pity them.

It’s ludicrous – they are a multi-million dollar company and I am a lone, quite unlucrative dude.  But I see this huge product which cost 200 million dollars to make, and I feel the need to reward someone, to pat them on the back.  And even though my money is mere pennies down the back of the sofa, I feel like it’ll somehow register in someone’s financial karma books, and a tick will be put next to the things I approve.

You see, the general subscription model is fundamentally flawed on the psychological level: it’s human nature to enjoy the things we know are in limited supply – as we crave those extra 5 minutes in bed in the morning – but in abundance any activity becomes mundane, boring, with the alternatives popping into mind and threatening to steal our attention.  Subscribing works for the things we need indefinitely like electricity, water, rent…  And extends to the entertainment we see needing forever, like internet service or specialist TV channels.  Spotify have just managed to make music an indefinite desired service – but only because their system is very convenient, and relatively cheap.

it’s human nature to enjoy the things we know are in limited supply…  but in abundance any activity becomes mundane, boring…

So when you combine a form of entertainment with a responsibility to play it (else be labelled promiscuous with your money), it creates a kernel of resentment which will probably grow as your players sink more and more time into that game.  This can be seen in the reaction videos of World of Warcraft players as they delete all their characters.  I’ve never played a WoW character to level 70, but I’m fully aware of the amount of time that must have been harvested here – and the cathartic digital self-harm that the video represents.

This is why the World of Warcraft subscriber base is waning – because people realise that they should be able to have their cake, or eat it, but they shouldn’t have to buy a new cake every month.

Bioware have mitigated this with the ‘Cartel Coins’ system, a method by which they can still earn money from non-subcribers – but this still fosters a slight form of resentment, as you start playing a game on the basis of it being free, then discover that you have to insert your credit card number in order to unlock inventory slots, or learn more skills, or earn experience at the same rate as ‘loyal’ players.  It’s not a large amount of money you need to hand over – you can correct most of these things for a one-off payment of £5 or £10, but it’s too late – they’ve already spoilt the sense of wonder, escapism and immersion by linking game features to your wallet.  And it is, once again, harder to enjoy an experience when you forget you’re a jedi in a wondrous forest, and reminded that you’re a software engineer sitting at a computer.

It was obviously a very tough decision for them to migrate from subscriber-only to preferred-player and free-to-play, but it might not be enough.  To really see their player base boom, Bioware need to make it free in all the ways that matter, so that players enjoy their experience from start to finish, and if they pay any money, it’s a long-forgotten experience when they come to playing the game.

This is no great prediction, but more an observation of the current state of the games industry in early 2013 – as entirely free-to-play games like Guild Wars 2 begin to shift into acute focus.  And many more games such as Clash of Clans are free to download and free to play after that.  You can still purchase items on the freemium model, but its impact on gameplay is not as vital.  And we see games like Age of Empires Online or League of Legends, where you may purchase items but they will only ever have an aesthetic effect – you can’t unfairly boost your character’s stats with real-world cash.  We welcome these games with open arms and they are also being churned out worldwide – perhaps the only limiting factor being the combination of words we can fit into the “X of Y” naming scheme.

So what will happen next?  No doubt freemium will live on as subscription services are reserved for only the highest-budget games we can reluctantly agree to pay for – but perhaps we will eventually move to another system altogether: micropayments.  In fact returning to the prescribed payment method for the first ever paid MMOs, we may see ourselves agreeing to pay per hour of gameplay the same way we rent movies online through Xbox Live or the Playstation Store.  We’ll hand over our money at the start of every session, and go about our business free of any sense of commitment.

Alternatively, we may see more adverts creeping into games.  And the same way we dive for the remote control in order to turn down the volume when the ITV advert breaks come on, we’ll wander off, or turn on the kettle as our gameplay is interrupted in order to shine shiny new products in our eyes.  Hopefully, though, the very original system will live on: we pay money once, and we take our goods, and then we enjoy them without interruption.  Let’s hope we can still play them when the internet goes down.

This entry was posted in Gaming and tagged free-to-play, freemium, MMORPGs, subscription games. Bookmark the permalink.