This is no doubt in my mind that Wreck-it Ralph is a good film.  I laughed, I liked the characters and wanted them to succeed, and went away feeling entertained.  It managed to walk a fine line between not confusing casual viewers who know very little about computer games and catering to dorky obsessive nerds looking out for every tiny reference to game culture.

Warning: Spoilers Ahead!  If you haven’t seen the film yet, you might want to come back and read this after you have. 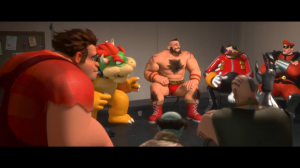 Personally I would have liked a few more said references, my eyes and ears were finely attuned to spotting characters and locales I’ve already spent many hours playing through.  Q-Bert and Zangief were welcome additions but sadly after the first 30 minutes the movie settled into its original characters and one main location – and a rather childish one at that, full of chocolate and sweets.  I feel like Disney missed a trick – where was the Monsters Inc-like scene at the end, with them dashing through different doors (games), pursuing the antagonist and being forced to adapt to different game types?  I wanted to see Ralph forced to play Halo one minute, Metal Gear Solid the next, then Puzzle Bobble…  But of course just smashing his way through to the horror of the respective in-game characters. 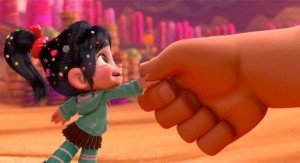 To the film’s credit, there was one scene which touched me on a totally unexpected emotional level.  Just when you feel like Ralph is making progress, he is forced into a situation where he must destroy something he has just created.  Just as the ray of light is cast, it must be extinguished with his efficient form of destruction.  He does it in a classic case of utilitarianism, and you know it’s the right thing to do, but just when he doesn’t want to wreck anything any more, he must: both the physical and the psychological.  And he does it with consummate efficiency.

If this was the end of my review, Wreck-It Ralph might be somewhat forgettable; an enjoyable but shallow romp around videogames culture, but it also touched on a subject upon which I feel passionately.  It almost excelled, but also totally blundered with its gender archetypes and equality.

You might be thinking, “Don’t be such a dashingly attractive idiot, Dave!  There were several strong female characters in the movie, including a space marine and the racing girl.”  You have a point, but they’re also overshadowed by their male counterparts at every turn.  Oh, just incidentally, do you know their names?  …  But you remember Felix and Ralph, right? 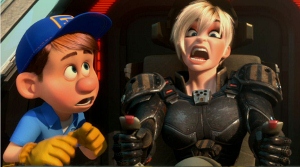 Sergeant Calhoun is an excellent example of a writer trying to make strides to satisfy feminists like me around the world, and while I’m definitely glad the film wasn’t filled with Princess Peaches (who would inevitably be kidnapped at the drop of a hat), she had to be propped up by the Fix-It Felix character.  She was essentially unstable, and while she did at least prove that she was physically strong, she was the only female marine.  Couldn’t we have had some others dotted into the squad?  On top of this she still had to become the love interest – as if we needed reminding that women are for impressing with our skills (or dorky admiration), and then should be married immediately.

And in an uncomfortable moment of classic sexism-overcompensation, there is a scene where Calhoun repeatedly punches Felix in the face.  Ok – there was a contrived reason for this to happen (and the plucky handyman could ‘fix’ his own face with his hammer instantly), but my test for whether a situation should be acceptable or not (with gender, race, or any quality you like), is: does it still feel ok if the roles are reversed?  If a burly male space marine was punching a small girl in the face, there would be outcry.  We mustn’t try to ‘make up’ for decades/centuries/millennia of sexual oppression by going in the other direction.  It just breeds more resentment.  Now is the time for equalism.

Does it still feel ok if the roles are reversed?  If a burly male space marine was punching a small girl in the face, there would be outcry.

Vanellope was shown to have racing skills, but was ultimately useless on her own.  She couldn’t do anything to un-do the ‘hack’ that King Candy had performed on her (and her world).  It wasn’t until Ralph appeared that she was able to do anything, thus cementing the idea that the women are incapable without a man’s help.  She does come to Ralph’s rescue near the end of the film, but it’s done in such a flashy and unfeasible way I felt a little nauseous watching the scene play out. 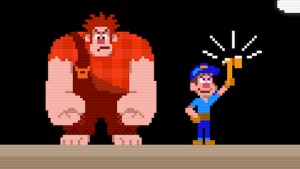 I wonder how Wreck-It Ralph may have turned out if it had been a Pixar project.  Perhaps they could have managed some of these issues with a little more grace, and ramped up the film in the areas I found lacking such as the cliche ‘action-movie’ ending.

Don’t get me wrong!  I still recommend seeing it.  It is a fantastically well-crafted story in a cheekily created universe…  It meets my needs as a geek – I just wish they had rounded off the edges to please me as a liberal, too.

This entry was posted in Gaming. Bookmark the permalink.