Looking around us, blue coats yelp as we are sprayed repeatedly with fine streams of water, and we are surrounded by a thick mist and whooshing roar of a powerful natural phenomenon. This is Niagara Falls!

We’ve had some lazy days on holiday, and probably our time in Toronto was the pinnacle: we got off our greyhound coach at 6am (noticing we’d gone through yet another timezone), and trudged to our hotel. But awesomely: it was The Hilton. Months earlier we’d found a suspiciously good deal on the internet and gone for it, aware that it might well be bogus.

We got there at about 6:30am and inquired about our reservation. I was convinced at this point that we’d been swindled but incredibly, all was fine. Our 4-star room had been paid in full! And they even let us check in then (8 hours early!) to start enjoying it. We found our room, and went straight to sleep. A greyhound seat being a poor substitute for a bed.

Waking up at noon we then went to the pool, and chilled out and read books. This, my friends, is a holiday. Perhaps we squandered our brief time in Canada. But we certainly did enjoy it. And we still had time to go up the CN Tower (and look down through yet *another* glass floor), and walk around the docks. Toronto looks very diverse, and I’d love to go back at some point to try the hippo tour bus that also goes on water.

The next day we started our Niagara Falls tour, and headed South, then East to the Niagara peninsula. Our tour seemed a bit disorganised and quite random – why did we stop at a vineyard?? I’m here to see a big waterfall! We also stopped at the niagara whirpool, found just down the river from the falls, and an enormous floral clock. I said very dryly to Sarah, “What did he mean, four o’ clock, it’s only half one.” But my humour was lost on our tour companions, who merely gave me condascending glances.

As we got near the falls, I went through the process (as any new visitor does) of comparing my expectations to reality. The falls isn’t a single long, thin waterfall. Actually it’s two different waterfalls, the “American Falls” and the “Horseshoe Falls”, the latter being the more famous (and let’s face it, America: the more interesting) one. They are both much wider than they are deep, although the horseshoe falls is still deep – over 50 metres.

We took a boat ride out called the Maid of the Mist, and were given free blue raincoats. But I was disappointed to find out they were little more than bin bags with holes cut in them for your limbs. We set off to farewells of “Enjoy your free shower.” Pah, I thought, I could take a little bit of fog.

Going past the American Falls we realised how big they really are, with people scattered around them like ants, all drawn in by the fury of the white rocketing water, as we were. Then we got close to the Horseshoe Falls and I realised it was actually going to get quite wet. The falls kicked up a LOT of spray and we were headed right for it! But we grinned in anticipation, pulled our makeshift bin bags over us and headed in. The boat positioned itself in the centre of the horseshoe and the falls roared around us, and I felt quite in awe. The water had a fresh airy taste and it was thrilling to be drenched in it. And very funny to look around at everyone, resembling smurfs, on the sodden deck.

We got back on dry land, found our suitcases, and attempted to locate our hostel. Our lonely planet book had recommended a “central” one – unfortunately central to downtown Niagara, not the falls itself. So we started walking, intending to hop into a taxi if we found one.

We walked, and kept walking, and nearly got arrested for jaywalking before I hopped back on the pavement, and realised we’d taken a dent out of the 1.6 miles to our hostel. With all our things it was quite an effort to walk though. But have you ever started a thing, got so far, regretted it, then realised you might as well just finish it? And so our baggage-laden walk became like a bad book, and we knuckled down to do the whole thing. At least it saved a few dollars.

I’d never been in a hostel before, and I was impressed to find a full kitchen, approachable other guests and a full entertainment room downstairs. The room was basic though – it didn’t even have a bidet. We played pool, then spoke to an Italian couple who kindly gave us a lift back to the falls.

And it looked just as good at night, when they shine coloured lights onto the falls. I took a few high-exposure photos (don’t worry people! I will put them on facebook soon) and got quite damp from the ever-present spray that reaches over the banks.

I have occasionally wondered if I am slightly autistic and this conversation with Sarah only reinforced that thought:

Sarah: “When do you think they started lighting the falls?”
Dave: “Well, probably since Sunset.”
Sarah: (Pauses to chuckle) “No, I mean, which YEAR??”

What do you think? Maybe I need help. Although I insist her question was ambiguous.

Only two streets away from Niagara Falls is a road called Clifton Avenue, which is a tiny bit like Las Vegas, transplanted next to an amazing natural phenomenon. It comes off as especially tacky next to the natural beauty of the falls, but we still had some late fun there playing glow-in-the-dark mini golf and going to a karaoke bar, though neither of us were quite drunk enough to sing (if only they’d had some Flight of the Conchords, that would’ve been a slam-dunk).

We got back to our hostel via the slightly unpredictable falls shuttle, and slept in our basic but comfy bed.

And now we’re on the Amtrak train to our final destination: New York. And for I think the first time in my life, I’ve upgraded from basic/cheap/coach/economy tickets. It’s business class! Where our legs have the freedom to stretch, and gold-plated flunkies fetch me tea and croissants at my vaguest whim. Although, I am a bit of a socialist, so I feel slightly guilty. 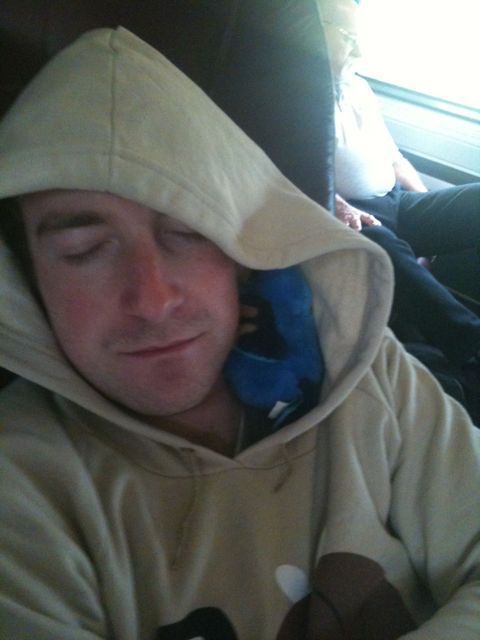 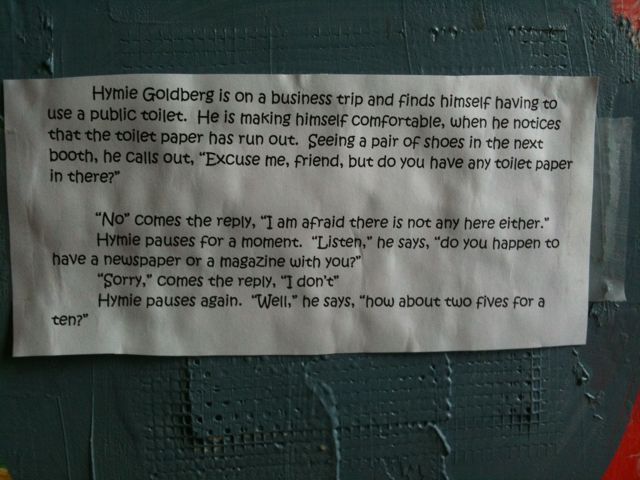 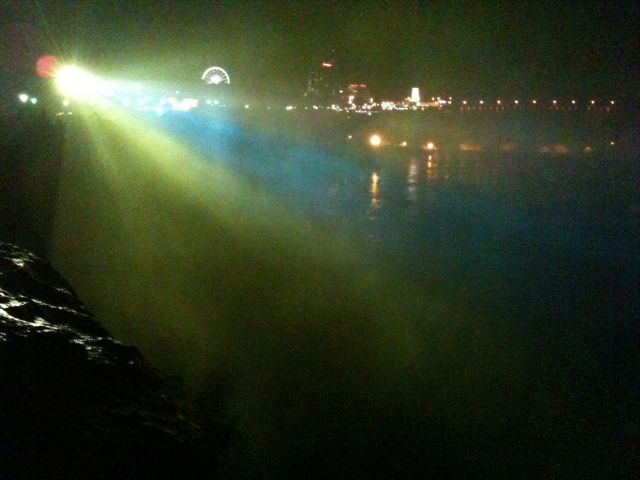 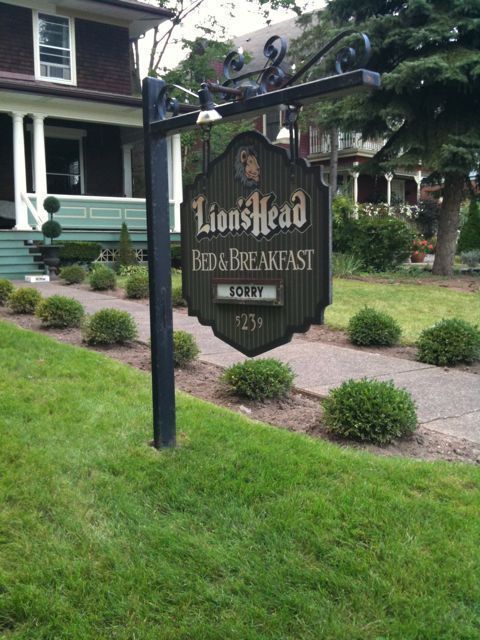 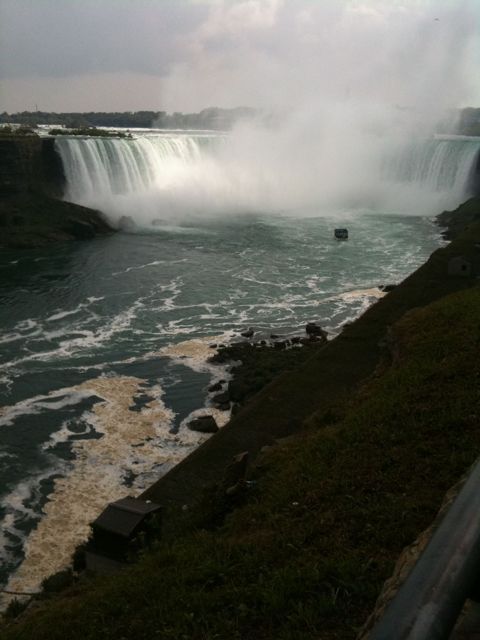 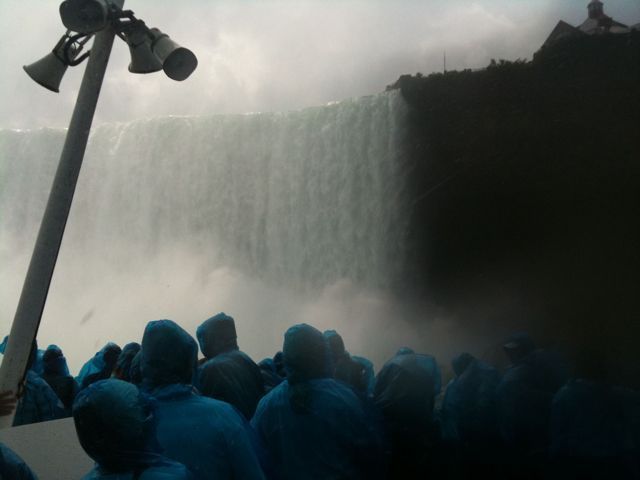 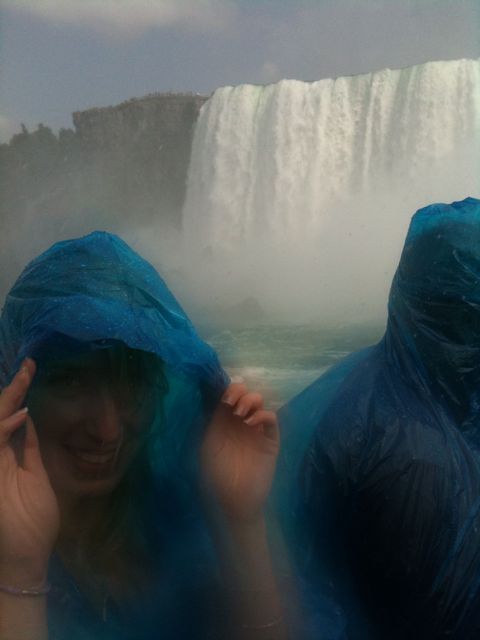 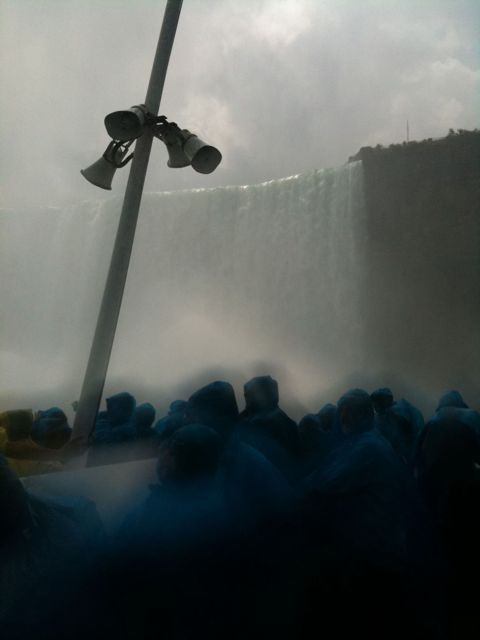 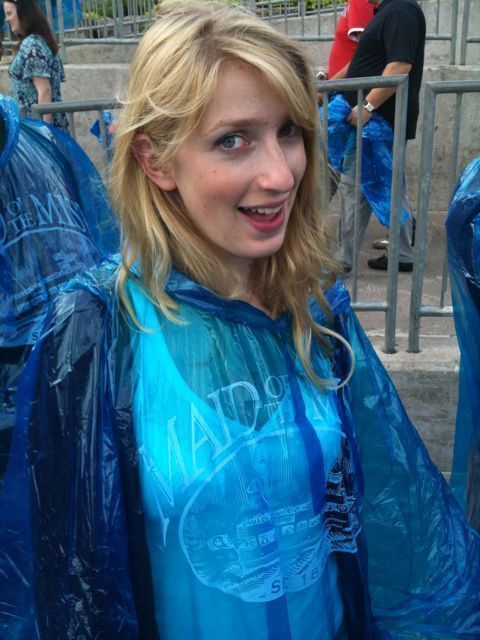 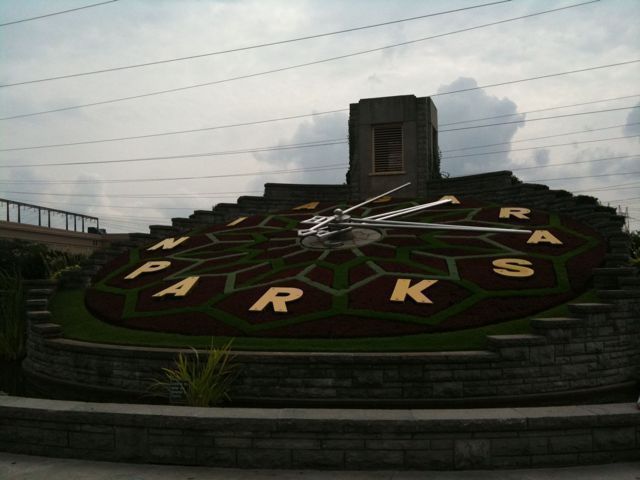 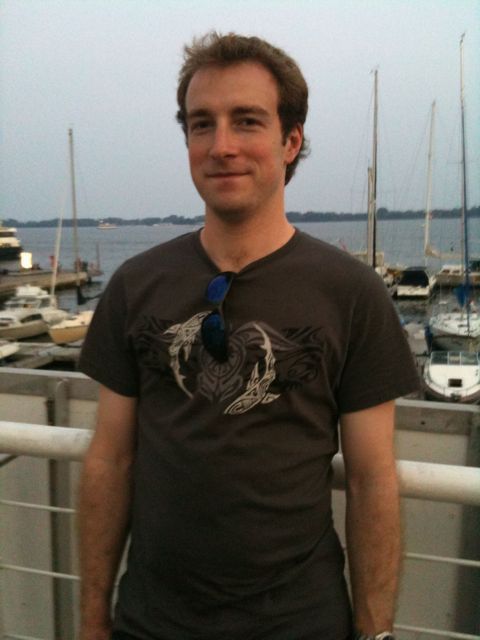 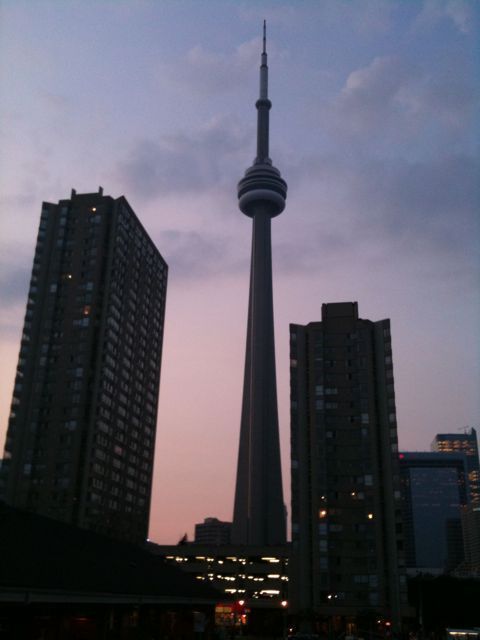 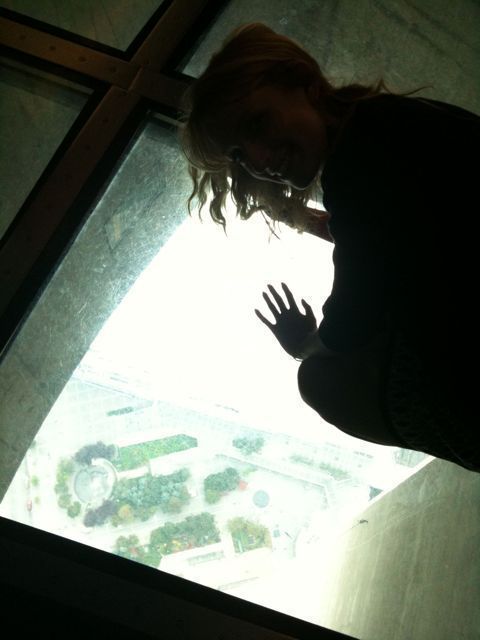 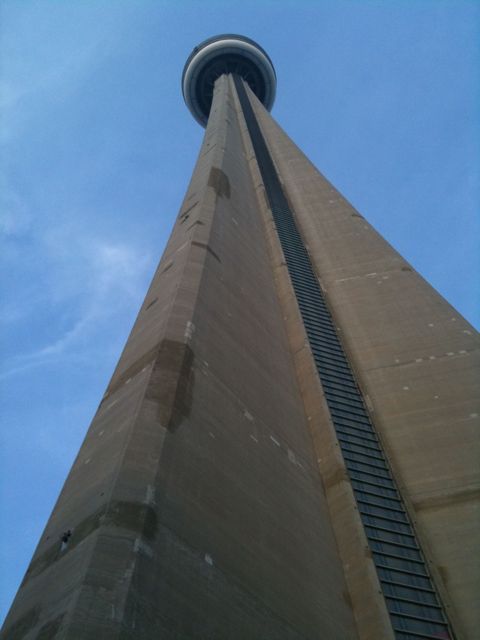 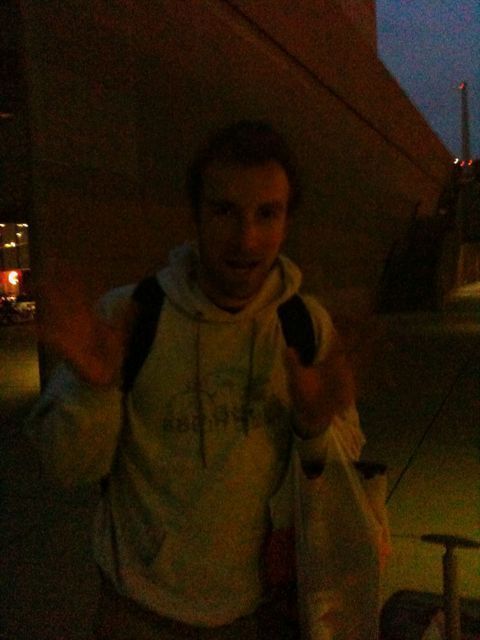 This entry was posted in Travel and tagged Niagara Falls, Toronto. Bookmark the permalink.