We arrived in Flagstaff at about 4:30pm on Wednesday, waved goodbye to Elin, and got dropped off at the greyhound station. Immediately two very friendly guys started quizzing us on where we were from and our travel plans. It was nice, if a bit intense, so we chatted along quite happily.

I wanted to take a picture so I reached into the usual pocket and was confused by the absence of my camera. I checked all my pockets. And my rucksack. And Sarah’s bags. Ok, time to panic. I had lost my camera with hundreds of photos already, and all the really good grand canyon ones. A horrible gloomy feeling descended on me; a mixture of guilt and anger: had someone stolen it?

I rang the coach company who had taken us from the canyon to Flagstaff. I spoke to someone straight away who went to search the bus. Minutes passed, mentally hoping he would return triumphant. Eventually he did return, but had not found any camera. He said he’d scoured the whole bus.

I had to come to terms with the fact that I’d lost my camera, and gigabytes of photos and video. I felt slightly sick. And around us as this was happening, the intense conversation about our travel plans and peoples’ distant Irish heritage was continuing. It took all my effort not to scream. I wanted them to understand this was not the time for an interrogation, it was the time to be angry and kick dustbins.

During all of this a native American Indian had arrived, explaining he’d hitch-hiked from Las Vegas. That was impressive (it had taken us a flight and a coach ride). What was more impressive was that he wanted to sing a native song about travelling. So he did. Right in front of 5 total strangers, about 1 minute after meeting all of us.

After the song he seemed to take a very great interest in Sarah, complimenting her on her hair and eyes. He then actually attempted to solicit her. For money. He had a cheeky grin like it was a joke, but it had a disturbingly serious undertone. Maybe I should have been the overprotective boyfriend at this point, but we just chuckled and pretended it was very funny.

Coupled with the camera loss this was about all I could take. I really thought I would explode any second.

And then, like light shining down from the heavens, with a full choir singing in the background, the original coach pulled up, the driver smiling at me. And as he got close he held up my camera. I thanked him profusely, gave him ten dollars, and got my brain back on the track of enjoying the holiday.

We had to wait a little while for the greyhound station to open, then we went in to collect our carefully planned prepaid tickets. One of the friendly guys with a big hat said he’d look after our suitcases while we went to find some dinner, so we left him in charge and started looking for the local Safeway. I was a little concerned we’d come back to find Sarah’s suitcase wide open and her new fan with her knickers on his head, but thought Big Hat Guy would probably prevent that.

We loaded up on delicious foreign snacks; it was really fun picking out things that we half-knew from films, and brands that have different names (like Lays instead of Walkers).

We got back and boarded the bus. This, I thought, would be the toughest part of our trip – 18 hours on the coach, from Flagstaff to Oklahoma City, about 900 miles. It was crowded so I asked someone to move so Sarah and I could sit together. He complied, in total silence which I thought was weird, but I thanked him and we sat down. We set off and both fell asleep fairly quickly, despite the cramped seats and baby gurgling behind us.

Then all the lights came on, blinding us awake. It was the first of many stops. I thought we’d be going for 6 or so hours at a time, but as we progressed I realised we would only do 1 or 2 before taking a break. This was good since I could stretch my legs and go to the loo, but I did also yearn for us to take a big bite out of our journey, rather than nibbling away at it.

We stopped at some well-known cities, like Alburquerque and Amarillo but barely had time to look down the road. As anyone who has used public toilets knows, the quality can vary wildly. But the thing about American ‘restrooms’ seems to be that there is always a huge gap on the sides of the cubicle doors. This means that you feel ever so slightly exposed when you use one. In one station we stopped at, there was a cubicle with no door at all. You’d have to be feeling pretty brave (or extremely desperate) to use that one.

At Amarillo we were half-way through a conversation with a local about Chicago when we noticed two guys behind him getting arrested. An officer dressed in green (which we later found out to be customs and border patrol) was putting two men in handcuffs. They seemed disappointed, not angry, which I thought was odd. Then they were discretely taken away.

We asked a fellow passenger about this and he explained they were probably “illegals”. He seemed totally au fait with the situation but it made me feel a little sad, reminding me that I wished everyone could just live where they wanted. Or rather, that there was no reason people would ever need to desperately leave their hometown.

By this point we’d met quite a few other passengers. We all had one thing in common: we had business in a very different part of the coutry. Some were headed to Oklahoma, some even further to Chicago. But it was interesting how the bus had scooped us all up together for a day. We waved and smiled our goodbyes after drawing into Oklahoma City, which was unexpectedly raining very heavily, and started trying to find our next hotel. 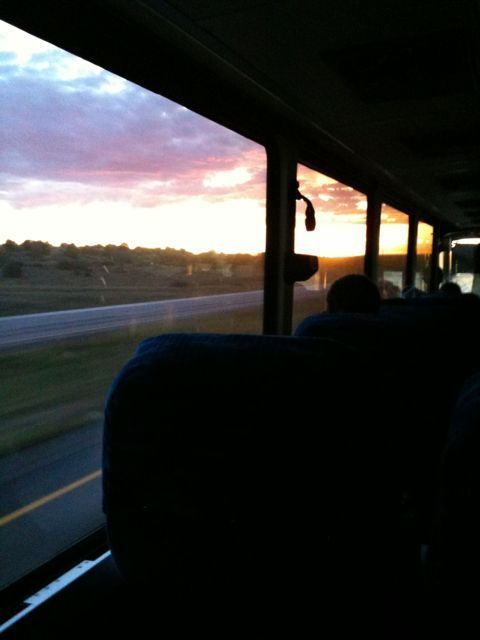 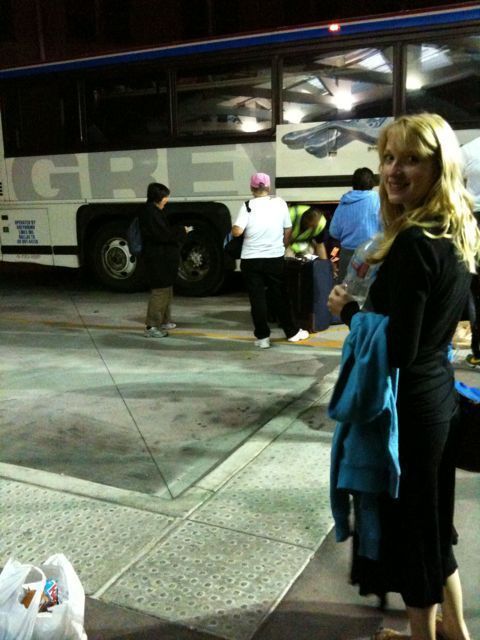 This entry was posted in Travel and tagged Greyhound. Bookmark the permalink.