“We all see life through a different lens.”

Eugh. What a tired old cliché (also: isn’t “tired old cliché” a tired old cliché?). It’s a way of justifying to ourselves that we need to be more open-minded. But it does carry some actually really weighty significance. Bear with me, because I think I can show you a way of thinking about this you might not have considered before.

The origin of this philosophical device, for me, goes back to the exploration of the idea that we could each see colours in a different way. What’s green to me might be red to you – but because we’ve both grown up calling it “green”, we both identify it the same way. We wouldn’t know the exact chemical and electrical processes occurring in each others’ brains. This blew my mind when I was 15.

But that’s just the tip of the iceberg. I want you to imagine this idea extending from basic colour recognition to the way we individually see words, sentences, ideas, and situations in life.

Allow me to demonstrate with a series of trite, patronising and thought-provoking graphics. Check out my little table of numbers below: 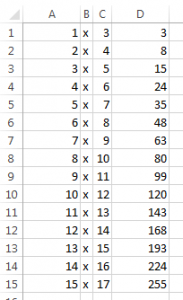 That looks fine, right? One times three is three, two times four is eight. It follows a nice pattern and everything appears to be in order. Maybe you checked the easy ones like eight times ten.

But wait! There’s an error! Thirteen times fifteen is not one-hundred and ninety three!

A mathematics guru would have spotted this, and it would have made them uncomfortable. Upset, maybe. Potentially even angry! I apologise to any maths gurus reading this blog.

This happens to me quite often. I usually consider myself a bit of a spelling and grammer nazi, so when people use the wrong your, you’re, to, two, or too, it ruffles my feathers a bit. Even when people use funny when they meant fun, I have to concentrate to keep my smile from breaking. And that’s unfair – it’s a really difficult and subtle distinction for foreigners (well done, by the way, for learning a whole other language… I can speak Swedish, badly, and enough French to order a croissant).

So if you’re looking at that table and thinking, ok, there’s a small error, no big deal, imagine this sentence, now:

Did you spot the error? Maybe you did? But it’s subtle, right? It doesn’t jump out at you and assault your eyes.

What about this one?

Yeah. It’s starting to get pretty bad. Or this one?

I’d hope the majority of my readers could see the problem in the above sentence.

This is fine for a paragraph of text, as the error can be described in literal terms, and it can be corrected easily (most of the time). There is also a set of rules for the English language, so although some phrasing is subjective, the rules for which pronouns to use in certain cases (for example) is preset, and there is a definitive correct answer.

Now, please take this a step further. What if we apply this principle to any form of media or communication, or any way of visualising any idea at all? It’s possible that a friendly chat could be a harsh interrogation to someone else, and you would both be right in your very subjective perception of that situation. What you might perceive as constructive feedback could be useless nit-picking to your friend, or what might seem like the obvious way forward to you is certain disaster to a colleague.

Let’s just stop and think about that really quite profound revelation for a minute. This means that there isn’t one universal, correct way of viewing the world. There are several. Maybe hundreds. Thousands. Millions? We need to become aware that we perceive the world in our own unique way, which is a product of our specific brain chemistry and biology, coupled with decades of experiences – good and bad – that have shaped our opinions and reactions. And while it’s incredibly difficult to break out of that as it is literally the habit of a lifetime, we may be able to stop, and consider that someone else is getting a different experience.

This might be fine if all we’re ever arguing about is grammar or whether to have tea or coffee with breakfast. But what if it becomes a moral issue? What if a crime is justifiable to someone else, but not to you? Or vice versa?

This happens regularly in my office (not the crime, but just about every other situation), and in discussions when talking to friends. If we’re not careful, a difference of opinion can lead to an argument, alienation, or much worse.

So how can we avoid that and what can we actually do about it? First, let’s start with what we shouldn’t do:

Sadly we can’t just jump into someone else’s brain. The first thing we should do is relax, calm down, and avoid acting impulsively (and often emotionally). Then, when we feel like a rational human being again, we should:

When we make this kind of an effort, people get a lot off their chest and are more likely to open up to other ways of thinking (specifically, yours). And who knows? They might even convince you to change the ‘lens’ through which you are seeing the problem.

Sadly, not everyone is reasonable, and sometimes we are forced into a situation where we must disagree. Then it’s time to talk to other people, and decide on a course of action unanimously or at least democratically.

I hope this has made some kind of sense. If it has, and you agree with everything I said, and would like to add some positive comments inline with my exact world-view, please use the comments section below.

This entry was posted in Life. Bookmark the permalink.

3 Responses to A Focal Point