Persona 5: A lifetime in one week 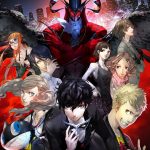 Upon finishing the game, I typed “post-persona…” into Google and was both surprised and relieved to see it auto-complete to “… depression.” Surprised because I didn’t expect it to be the first hit, but more relieved to discover I wasn’t alone.

And I say finished rather than completed because I have the option of starting the story again in “New Game+” mode, but I can’t bring it to myself to wipe their memories clean. The story has ended, and I have closure, but I’m not done processing it all yet. I haven’t completed the game because I didn’t see every cutscene or have time for every conversation, but I have finished it. Or maybe the game finished me.

So why did it leave this impact? For two main reasons: story, and characters. These two subjects have been written about endlessly so I won’t roll out the million reasons why they are the two most important things to get right in any form of entertainment. But I will mention a couple of things that were done so well here that it left a bigger impression than any other videogame. The Witcher 3 and the Mass Effect series came close, but this is a whole new level. I spent quite a bit of time in front of the tv playing these.

From this point on, there are SPOILERS! So if you haven’t played Persona 5 yet, do it now! Seriously, it’s wonderful. It takes a long time but it’s worth it.

Persona 5 is a game about time management. That immediately sounds like a boring game, but it’s not. Every day you are presented with a plethora of different options including hanging out with your friends, studying or otherwise improving your character on your own, or going to battle monsters in a strange alternate universe. You are also presented with the ambitious goal of attempting to maximise your social connections, study for exams at school, and defeat certain monsters – all before a time limit. Somewhere in your brain, you are very good at assigning value to these things and weighing up objectively different activities and deciding what to do. You do this in real life anyway (shall I go to the shops and buy milk, or sort out my emails?) – except for the monster-fighting part. Probably. At least, I don’t.

So a lot of the time, the game will move on to the next day and you’ll think, “shall I train with the kid at the arcade, which will improve my kindness and possibly give me a new gun skill, or shall I take a bath and improve my charm?” The game gives you some extra incentives, such as a bonus to studying on rainy days, or in-battle bonuses when your team-mates form a stronger bond, which influences your decision-making.

But the deadlines are tight, and you will find you don’t have time to do everything. This gives the gameplay a frought, tense pace, even though you play an entire school year’s worth of days.

Not all the characters are likeable – I found Haru’s childish voice acting (at least in the English version) to be grating, and Yusuke’s flowery dialogue to be pretentious with none of the intelligence, but it wasn’t a problem. I just didn’t hang out with them. Morgana, your 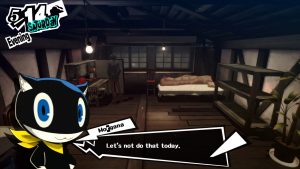 talking cat sidekick, starts off being whiny and conceited but somehow grows on you, despite also preventing you from carrying out extra tasks when you’re tired. “You’ve had a long day – don’t you want to get to bed?” No Morgana, I don’t, I want to go and work in the bar in Shinjuku to raise my kindness!

Slowly though, you improve yourself as a character in the various stats, and strengthen your bonds with the characters you like the most. You start to unravel the story, which has so many twists and turns you never get bored.

But unlike a movie that throws out so many ideas you can’t keep up (I’m looking at you, Star Trek Into Darkness), the game’s ideas hang together really well. The idea of starting the game with a flashback, and slowly showing how you got to that situation works beautifully, and what happens when you finally catch up is nothing short of storytelling genius. The writers combined everything you know about the gameplay with some very clever moves by the characters. 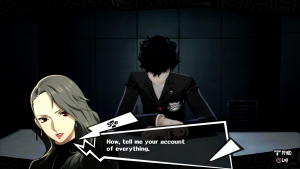 And more importantly, it feels like I was a part of it. I decided what to say in dialogue choices, and my character was right there. It’s the kind of immersion I never feel from a film, and very rarely from a book. I feel like it happened to me, and around me. I feel more like a part of a story than a passive observer.

The school setting is very clever. At a time of life when you know 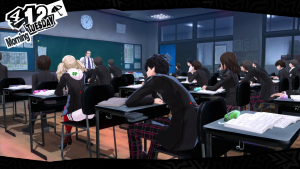 your hormones are in full swing, and emotional connections buzz and sting like bees sitting on power lines feeding directly to your heart, your mobile phone becomes a great menu for choosing your interactions and communicating with the cast.

None of this would be enough, if not for the gameplay. While I will say that it got repetitive towards the end, and the last boss is more a test of endurance than of skill, it should be noted that it is very good. A turn-based affair of choosing skills, items and special attacks, it has been finely honed over the course of the Persona games, and is presented with a confident style here. The simplicity of attacking in turn is embellished carefully with bonuses, buffs, debuffs, and rewards for capturing personas from the enemy.

And finally, the icing on the cake: the style. Persona 5 sweats out liquid gorgeous from every orifice, from the harsh zig-zag menus, to the attack animations, the picture-in-picture 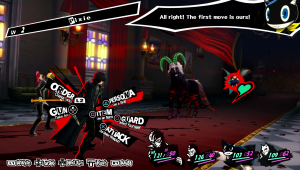 close-ups of your friends when they emote, and… well, everything. The personas themselves are fascinating beasts, as varied as Pokemon, and not afraid to live up to the 16 age-rating certificate. Some personas are chained women only covering their modesty with their hair, others are demons, grinning as they hide phallic cones. Later in the game, there is what can undeniably be called a penis monster. It literally is a giant penis, that imposingly lurches forward to attack you, and hangs pathetically limp when low on health.

It is not a short game, and requires a significant investment of time. Not just to make it through the story, but also to explore the different activities on offer, and maximise your limited time in the most efficient way possible. By the end of the game, I had got my character stats to max, and got the strongest bond possible with about 8 of my confidants. But it was close.

I went into the final section of the game hoping this was enough, and eventually saw the credits roll on what was an uplifting, bitter-sweet ending. It was with immense joy that I saw my character and my friends go on a road trip together to take me back to my home town, but it left this vacuous gap in my heart as I realised I wouldn’t see them again. They were happy, and safe, but lost to me now. My character might see them again in the fiction of the world, but I won’t.

The incredible irony is that Persona 5 teaches you the value of friendship and connections, and of working diligently to improve yourself as a person. However I looked at the final game timer on my last game save which read “134 hours” (slightly longer than it takes to watch every episode of Friends ever made) and realised I’d been sitting on my arse in front of my PlayStation for a long time. But… having said that, there’s no way I would take it back. In fact, I feel jealous of anyone who hasn’t done it yet.